Once a little village nestled between bright green rice fields, Seto is now part of a contiguous megaregion surrounding Nagoya.

Seto is an ancient town famous for its pottery.  Say “Seto-mono” (瀬戸物 – lit. Seto things) and the Japanese imagine the ubiquitous blue and white porcelain from this village.  Not long ago, every building was a potter’s home and studio.  Today, there are also pottery factories that spit out cheap Seto style pottery for the Japanese consumer.

Seto is also home to master potters.  The art of producing yakimono (earthen ware, ceramics – 焼き物) is a skill passed down from father to son.

Seto has produced great potters.   A foreigner does not usually have the opportunity to see the work of the great masters.  These pieces of art are displayed at museums, at special art showings, and in the homes of the wealthy or at friends of the potter.  Auctioned at Christie’s, the pottery of masters sell for thousands of dollars.

The pottery culture and its customer base in Japan is different from most countries.  Pottery is one of the oldest arts in Japan and a potter and his pottery is highly valued.

It is understandable that pre-industrial Japan would need pottery.   Pottery was needed for eating and cooking and used as storage jars and funerary jars.

It amazes and pleases me that in contemporary Japan pottery is still highly valued and bought by many.  These ancient pottery ‘villages’ continue to operate as they did generations ago.  Japanese tourists visit pottery villages and bring home omiyage (gifts) of bowls or cups for friends and family.   The Japanese collect pieces of fine pottery for their tables.  There are numerous pottery festivals in different villages throughout the year.  The finest pottery is used in chanoyu.

The production of traditional pottery is worker intense and the pottery is more expensive than mass produced ware.  Traditional pottery, yakimono,  must compete with highly prized Western “China” including Lenox, Royal Doulton, Haviland, Herend, Waterford, and Limoge.  In Japan, there are also American and European purveyors of a lower tier of dinnerware: IKEA and Costco.  Even ‘fine China’ is available from Japan’s own Noritake factory.

I believe there are many reasons: 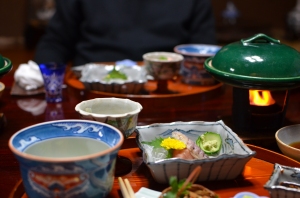 On Thursday, I went to the Museum of Modern Ceramic Art, Gifu outside of Seto.  The temporary exhibit is the “Mino Ceramics Now 2012” display.  Many of the pieces in the modern pottery display are incredible.  I mean, unbelievable.  It is hard to believe that it was possible to make those pieces out of clay.  There are sculptures, refined bowls and a motorcycle ridden by a little boy resembling the folklore hero, Momotaro.

Hoever, it is the exhibit of pottery of the National Living Treasures that is the most breathtaking.  There you can see the work of Master Potter, Tsukamoto Kaiji 塚本快示 (1912-1990).  Tsukamoto used white clay in which he engraved delicate flowers, kanji, dragons.  He used a clear or faintly blue glaze.  His technique results in giving a whiff of design and color.   A refreshing breath of dignity and poise!

The architecture of the museum building is worth seeing.  An immense and sprawling complex, it hangs onto the edge of a hill.   There are 32 suspended columns that support the huge edifice and give the building flexibility in the case of an earthquake.  The complex, however, is showing its age.  In a country dotted with REALLY old and beautiful wooden buildings, it seems ironic to say that the building that looks old is a modern structure made of glass and concrete.  Are modern buildings expendable as a part of a throw away system?

It is free to enter the building and walk through the gift shops.  The special exhibit is only 500 ¥ for adults.  The exhibit is open from September to November 11th, 2012.  Highly recommended.

Naoko Takabatake is a member of an active group of Jehova Witnesses in my neighborhood.  Naoko came to my door the first week I arrived.  She introduced herself.  To her credit, she never has tried to evangelize to me.  That first afternoon she took me to a local park and shared with me tea and kakigōri (shaved ice).  Once a week, Naoko guides me to good places to eat, shops and takes me to cultural sites.  She introduces me to her friends and gives me new words to add to my vocabulary.  Naoko and her husband took me to see the Mino exhibit.

Norio-san and his wife, Tsumaki,  met us at a local sushiya-san the 2nd day we moved to Nagoya.  Without knowing much about us Americans, they warmly encouraged us to join them at the Seto festival in early September.  Norio-san’s daughter, Kumiko Murai and her family drove Don and me to the Seto Matsuri on September 8, 2012.  Norio-san generously gifted to us pieces of Seto-yaki and then Tsumaki made us a Japanese dinner made of fresh vegetables from her garden.

This entry was posted on Sunday, September 16th, 2012 at 12:52 am and tagged with Art, Ceramic Art and Pottery, Crafts, History, Japan, Japanese people, Japanese pottery and porcelain, Mino ware, Nagoya, National Living Treasures-Japan, Pottery, Prenuptial agreement, Seto, travel and posted in History. You can follow any responses to this entry through the RSS 2.0 feed.
« Akariya Coffee
Samurai and Sutras »